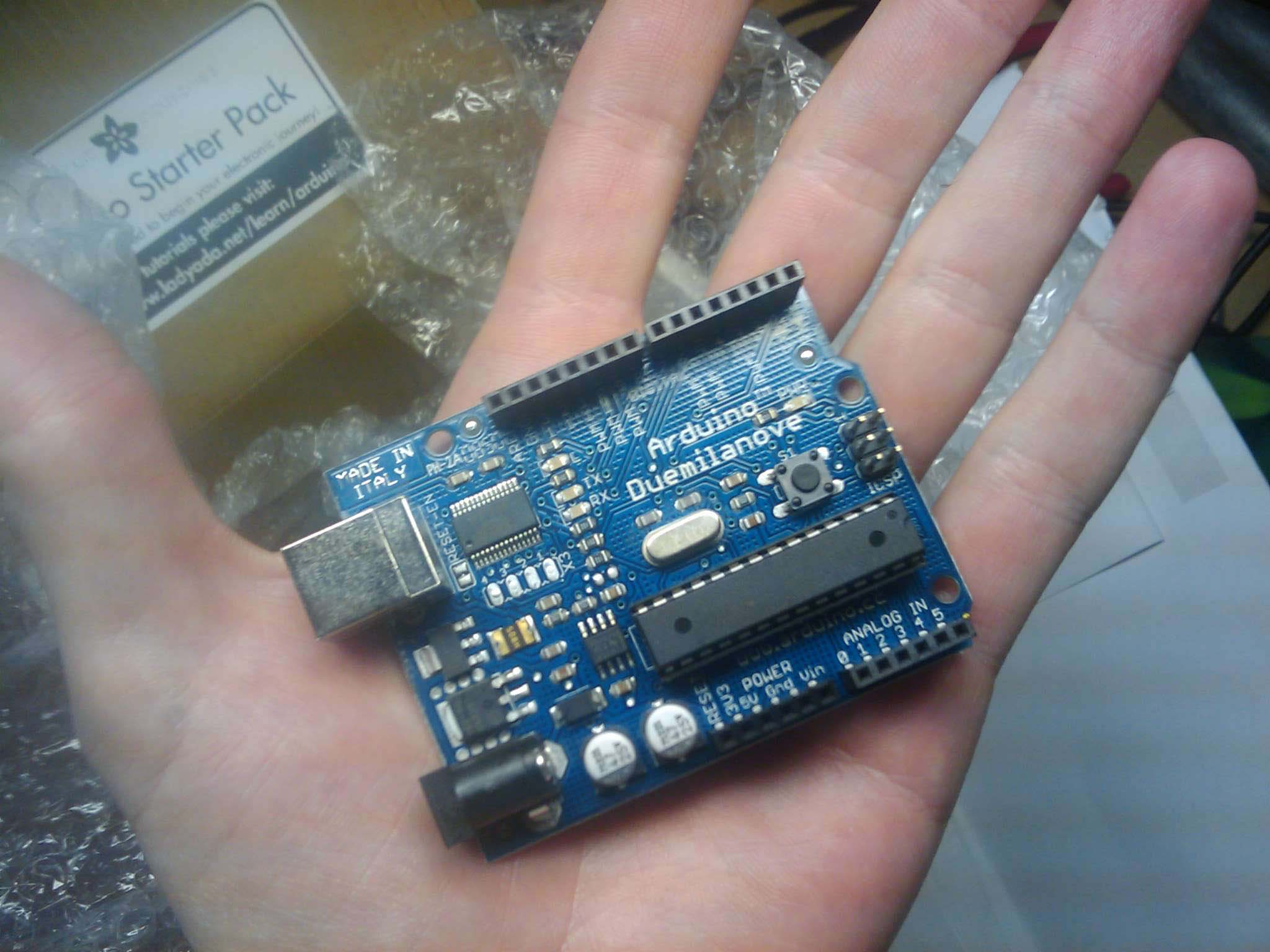 Prologue: For Christmas, I received an Arduino.  If you’re not familiar with them, they’re like a little computer with a lot of pins to which you can connect outputs like LEDs, servos, relays, triacs, or anything you’d want to control, as well as photosensors, switches, anything you’d want to take an input from.  You write your program in the easy-to-learn Arduino environment, upload it to the Arduino board, and it’ll run your program automagically.  I’m not a programmer, but less than an hour after taking it out of the box I had it blinking an LED for me.  Buy one, they’re perfect for all of us who are trying to create some Theater Magic with no money or hope of getting any.

Well, Almost Perfect.  There’s been a way to send DMX with an Arduino for awhile, but when I started poking around for DMX reception code, I came up with zilch.  If you’re already savvy with microcontrollers and assembly code and avrdude and whatever-the-fuck-else, you probably know about this solution.  Me, I look at assembly code and I just hear a dull screaming in my head, nevermind all that other stuff that I don’t know how to do either.

So I figured that a great first project would be to remedy this situation, and write a program to receive DMX on the Arduino platform.  In the way of all Works in this Vale of Tears, this ended up being much more difficult and taking much longer than I initially anticipated.  But eventually I figured it all out, and so here it is!

DMX uses a twisted pair of signal wires with opposite polarity to transmit information per RS-485.  However, your Arduino needs a serial signal, with a pin brought high for one and low for zero.  To convert between these protocols, you’ll need to wire up your MAX485 or 75176 in the following way: 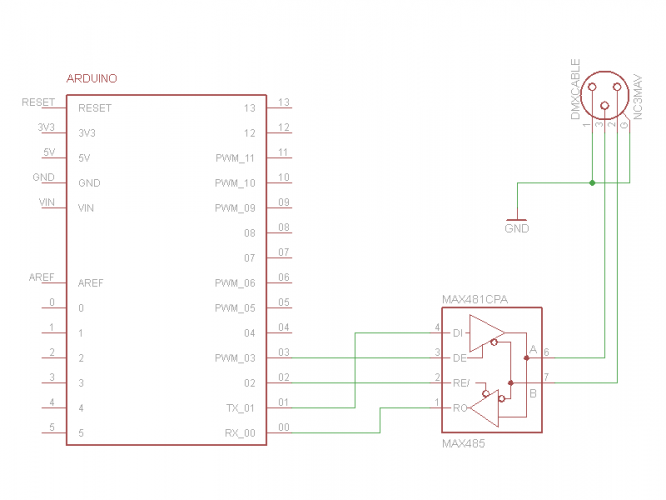 Here are some pictures which may help you:

Note 1: Starting with Rev11 of the software, I adjusted the pin layout slightly for better routing on the DMX I/O Shield.  The two gray wires in the above photos that are plugged into pins 3 and 4 should be plugged into pins 2 and 3, respectively, if you’re using the latest software.

Note 2: I’m using the Arduino protoshield here, which I highly recommend, they’re handy.  If you don’t have one, the pin layout is the same as if you ran directly into the Arduino board.

Note 3: if you want to retain the use of pins 1, 4, and 5, at the cost of being able to transmit as well as receive, you can connect the corresponding pins on the MAX485 to the ground on the Arduino board.  I’ve done it this way for possible future RDM functionality ;).

The reason for this is that the Arduino software defines the USART_RX_vect serial reception interrupt, and includes it in your compiled code, even if you don’t use any serial functions.  This will, I hope, be fixed in a future release, but until it is this is the work-around.  You can read more about the issue here.  Once you’ve uploaded the sketch and it’s working to your satisfaction, you can undo this part to regain your normal serial library functionality.

Finally, fire up the Arduino software, and put what you want the Arduino to do with the received values in the action() loop. The received values are stored in the dmxvalue[] array. The downloaded sketch contains example code to print out each of the values to the serial port, and set PWM pins 5 and 6 to the first and second value in the array, respectively, but this can of course be changed to anything you want.

That’s it, let me know how it works for you!  You may want to keep reading for the Known Limitations, etc.

The Code: Here is the .pde sketch file.  It may be of general interest as well if you’re trying to write interrupt-based programs for the Arduino.  In the download, there is also a tab for the user code and another for in-the-field addressing module.

P.S.: There’s a really good comment thread for this post and it may answer your question, especially if it is of the form ‘will it work with this other Arduino library?’ So take a gander at that before writing a comment, if you would.