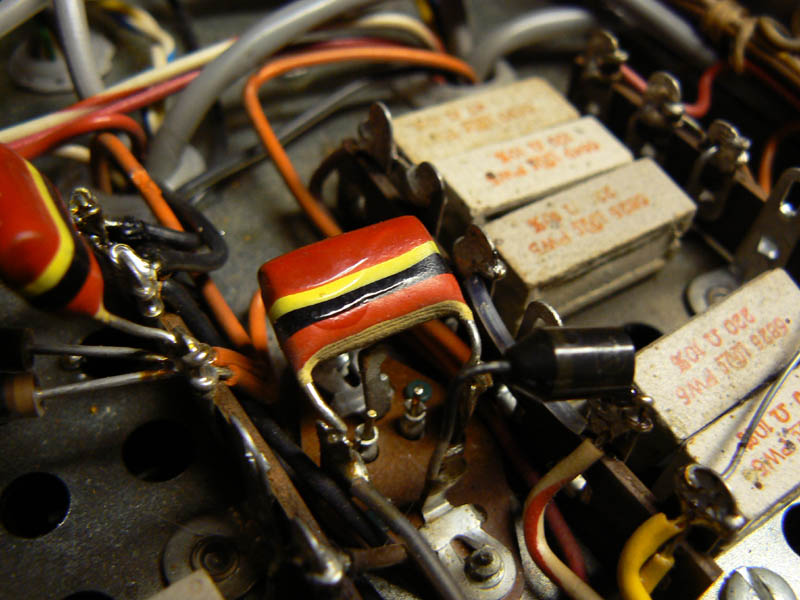 So, you’ve decided to repair/upgrade your vintage audio equipment by replacing the capacitors.  When you go to Mouser or Digikey, however, you are presented with tens of thousands of choices.  Even after drilling down to the specified capacitance and voltage, you have dozens of candidates, differentiated by such esoteric terms as Tan Delta, Q Value, ESR, etc, etc, etc.  Here’s what you need to know to pick the best capacitor for the job, without spending a fortune on Super Fancy Audio Capacitors.

First, a quick review of what capacitors are and how they work: You can think of a capacitor as a bucket o’ electrons. All capacitors have two layers of conducting material, with a layer of non-conducting material between. The non-conducting material is referred to as the dialectric. What makes a material conduct is that it has a large number of possible electron configurations, so that at any time in a metal there are a cloud of loose electrons wandering from atom to atom. When you apply a positive voltage to one side of the non-conducting plate, it pulls electrons off of that plate, much like lower air pressure in a room that you’ve just taken the air pressure out of (electrons are negatively charged, and so they are attracted to a positive voltage). The lack of electrons on the positive plate induces a greater number of electrons on the negative plate, giving it a net negative charge.

The astute reader will notice that as the electrons are actually travelling towards the positive voltage. The direction of current travel shown in most electrical schematics is actually the opposite of the direction of charge carrying particles. We have Ben Franklin to thank for this incorrect convention, and in some European schematics, particularly older ones, the current orientation is shown correctly.

This is probably the point where I should talk about electrical safety when working with large capacitors. Capacitors store electrons, and if you place yourself between those electrons and a ground, they will shock you, and it will hurt. What makes this particularly easy to do is the fact that the entire metal chassis of the amp is the ground, much the way your car is wired. So here’s what you should do after you unplug the amplifier and before you start rooting around in there:

Check the positive terminals of all your large filter capacitors with a multimeter, on DC voltage. If it reads less than 12V, it won’t shock you, but you still might fry another component by shorting it to the capacitor with your metal tools.

If you have a cap that still has some juice in it, connect a 1Kohm (1000ohm), 5W resistor across the leads and let it discharge until the voltage reads zero.

Capacitor Metrics: There are four main specifications for capacitors.

Dialectric: The fourth way that capacitors are specified is by dialectric, the type of material separating the metal plates. There are three common types of dialectric.

Ceramic: the dialectric is porcelain, giving these capacitors long life and high voltage, although with low capacitance. Often, they are a tan/brown color, and usually disk-shaped although sometimes tubular shapes are used (the tubular ceramic capacitors may be replace with ceramic disk capacitors). Generally, these capacitors do not degrade over time, although they can be checked for mechanical/heat damage, and also continuity. Because they can store charge, the continuity tester may briefly beep or light up, but should not stay on.

In the picture, two capacitors are shown. The one on the left reads:

Film Dialectric: in film dialectric capacitors, the dialectric is some kind of plastic, such as mylar or polypropylene. This dialectric allows a high voltage and long life, but at a downside of being relatively large and expensive. There are a bewildering array of possible dialectrics in this catagory, but on the recommendations of people who know more about this stuff than I do, metallized polypropylene is a good and inexpensive choice for audio applications.

Film capacitors generally do not wear out, so replacing them is more in the upgrade catagory then restoration. However, because electronics in this area have improved tremendously in the past however may years since your amp was built, it can still be worth doing.

Be advised that as film capacitors are often used in the signal path, and the newer film capacitors have improved electrical characteristics, you may change the sound of your amp by replacing them. Maybe for the better, maybe for the worse. There’s a lot of art here in the intersection between the objective electrical characteristics of the capacitor and the subjective assessment of how good it sounds. The good news is that electronics parts are cheap, so if you don’t like what you get you can try something else.

The picture above shows a film capacitor with the color band style of marking. These can be a little tricky, and the web has a number of different and sometimes contradictory answers on how to read them. But in general, they work like resistor color codes.

In the diagram, the color bands are:

I guess, anyway. I actually went to the schematic and read the specs off that.

Electrolytic Dialectric: In this type of capacitor, a chemical insulator is applied to one of the foil plates. This allows for a much thinner dialectric than other types of capacitors. Capacitance, you’ll remember from E&M, is directly proportional to the area of the plates and inversely proportional to the distance between them, so this design allows extremely high capacitance in a very small volume at low cost. This makes electrolytic capacitors ideal for power filtering, as the larger the cap, the less ripple current. Electrolytic capacitors come in a variety of forms, the attached images show a few of the more common varieties.

There are a number of downsides with electrolytic caps.

Other capacitor characteristics: Because of the wide number of applications of electrolytic capacitors, there are a wide variety of characteristics that you’ll have to choose between when you’re matching the parts. Here’s my take on them:

The Upshot: Here’s what to look for, if you were kinda skimming for the last 2,000 words or so.

Quick and dirty test for people who don’t want to wade through the specs: Low tan(delta), low dissipation factor, or high Q factor.

Where possible, I replaced the electrolytics in my MAC1700 with Panasonic FC or FM series and Nichicon PW or HE series. I also later replaced the film capacitors, which were crumbling into dust due to the amp being stored in a garage in Texas for many years. For those I used Xicon MPP series.  My parts list for the MAC1700 may be downloaded here:

For the whole project, including shipping, my cost was about $90.  If you want to be a little smarter about where you spend your money (“Computer Grade” capacitors are really fine for the power filtering sections, e.g.), you could probably cut that in half.

From toothpaste for dinner