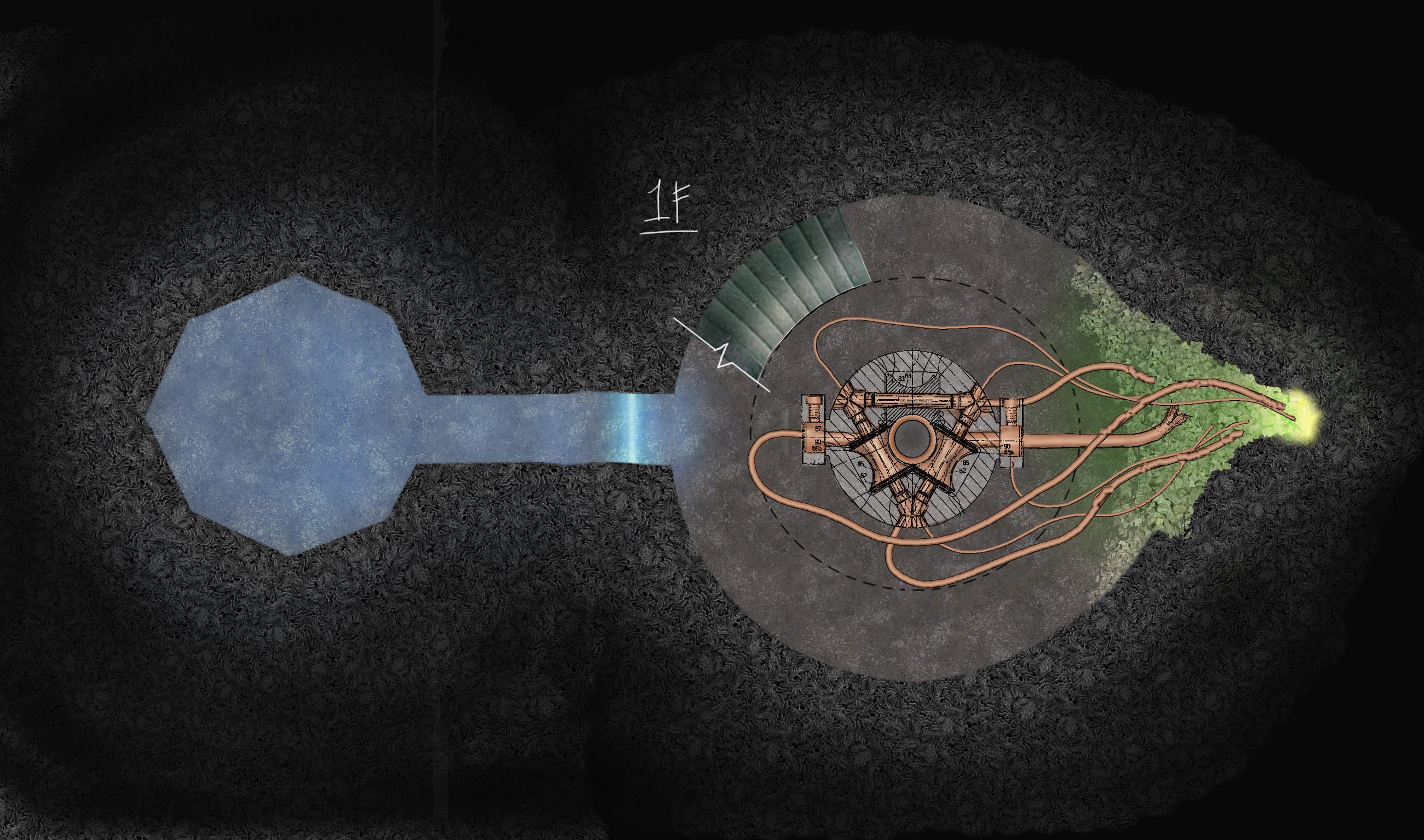 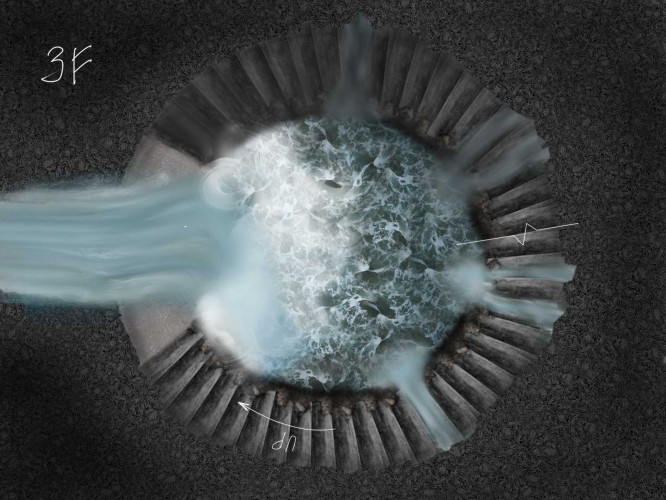 Some of you may know I run a Sunday night Dungeons and Dragons campaign (specifically Pathfinder, with Roll20 for our virtual table top).  If that’s not your thing, move along, nothing to see here.What follows is artwork I’ve created for the dungeons that the party has explored over the last two years or so.  Mostly made on my tablet with Sketchbook Pro.

“Wading through cold, knee-deep water, you come upon a multi-story circular room, with a staircase winding around the perimeter.  From the ruined openings on each floor, water pours into the open space at the center with a deafening roar.  Cold mist lands on your face continually, and lichens and fungi line the walls.  Everything below the top three floors is filled with cold, turbulent water, and you can’t see how deep the chamber goes.”

The party needs to use the stairs to move from floor to floor.  But waiting in hiding are flying will-o-wisps, which can stun and enchant the party members, causing them to step off the stairs and fall into the water below.  They don’t take any damage from the fall per se, but the Hook Horror Darkfiends that live in the pool will try to pull them under.  Symbiosis!  Once someone fails their save, the remainder of the party has to think fast to save their wayward member.

This encounter was very nearly the last of the party’s stalwart mage, Baden Switch. 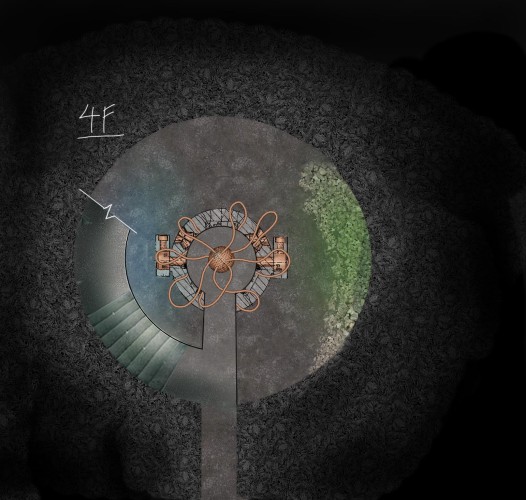 “At the end of a long narrow tunnel you see a wan glow and have a sense that the corridor opens up to a sizable room.  As you creep closer, you see that the room is four stories, and contains an enormous brass machine that goes from the floor almost to the ceiling.  Pipes, manifolds, valves, and dials of obscure purpose branch out of it at every part, and there are bridges that connect to the pathway that runs around the center of the room at each of the upper levels.  As you get nearer, more of the lower structure of the machine comes into view, and you see that many of the pipes disappear into a rough-hewn opening in the wall, which is the source of the green glow that throws the room into relief.  The wall around the opening appears to have partially collapsed, and the machine itself seems to have undergone heavy damage at some point, and then repaired with clumsy haste.  It is dark, and silent in the chamber.  You don’t see any sign of the lich, although on the ground floor there are long wooden worktables covered with glass vials, oil burners, and papers.”

The first run-in with the lich, the party got bottled up in one of the small tunnels that lead into the room.  The lich cast Wall of Fire, filling the tunnel completely with opaque fire that does damage when you try and move through it, and the party had to retreat without landing a hit.  The second time, they were prepared and executed good tactics, prepping spells and buffs, entering from multiple tunnels at once, using surprise to good advantage, and engaging with melee fighters immediately.  On his first round, the lich cast Obscuring Mist, Quickened (minor action, effective spell level 4th), ran to the machine (move action), pulled a lever on it, and with scream of triumph, snapped the lever off completely. (standard, strength check DC 15).

“As everything in the chamber is shrouded in a dense white fog, you hear the machine roar to life, filling the echoing chamber with noise and making spoken communication difficult or impossible.”

It went badly for the party for a few rounds, but they still managed to unload a lot of damage, and at the end of the day liches just don’t have a lot of hit points.  The rift that the glow was coming out of was an open portal to another dimension, and on a high roll every round the machine would summon undead through the portal.   Which the lich could control (fun fact, they get Control Undead a certain number of times per day the way clerics get Channel Divinity).  But, as it happened, the machine never hit its numbers and the party cast Chill Metal (2nd level) on the pipes going into the rift, mostly neutralizing it. 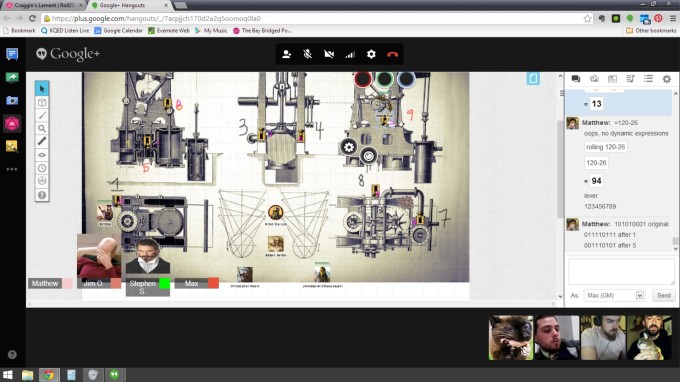 Having dispatched the lich, the party had the option to solve a puzzle to unlock the library, the room in blue behind the blue magical barrier on the first floor.  Shown is a screenshot from our virtual tabletop, Roll20. 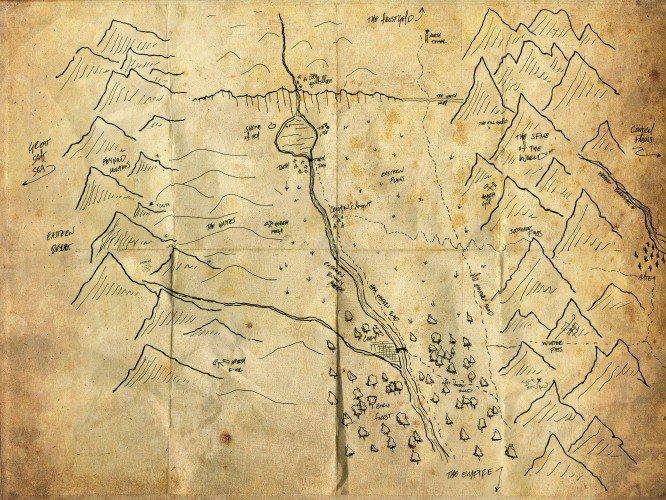 Five years ago, gold was discovered at a sawmill near the hamlet of Craggin’s Lament.  The entire valley is now in the grips of a full scale gold rush, and prospectors, outlaws, gamblers, and merchants have transformed the town into a bustling jumping-off point for any who seek their fortune in the hills.  Hired to locate a missing merchant in a bandit-infested alpine pass, our heroes come into possession of an ancient map, showing the location of settlements of a dwarven empire forgotten by all but scholars of antiquity.  Exploring the ruins, the party soon becomes the focus of forces powerful and mysterious…

One of the very first handouts I made for the session.  Map drawn on paper, then scanned and the folds and paper background were added digitally. 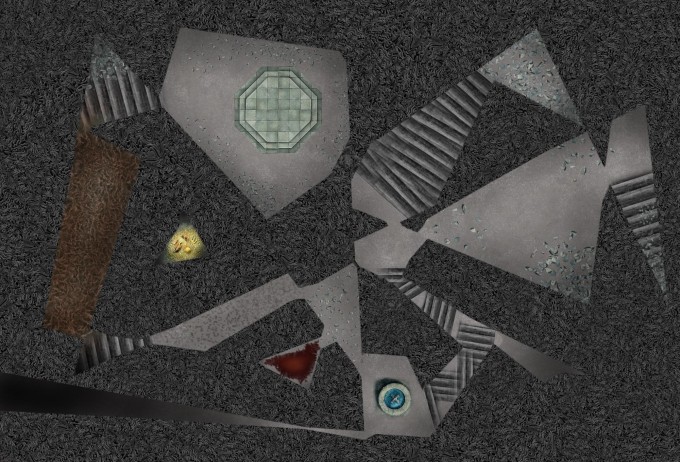