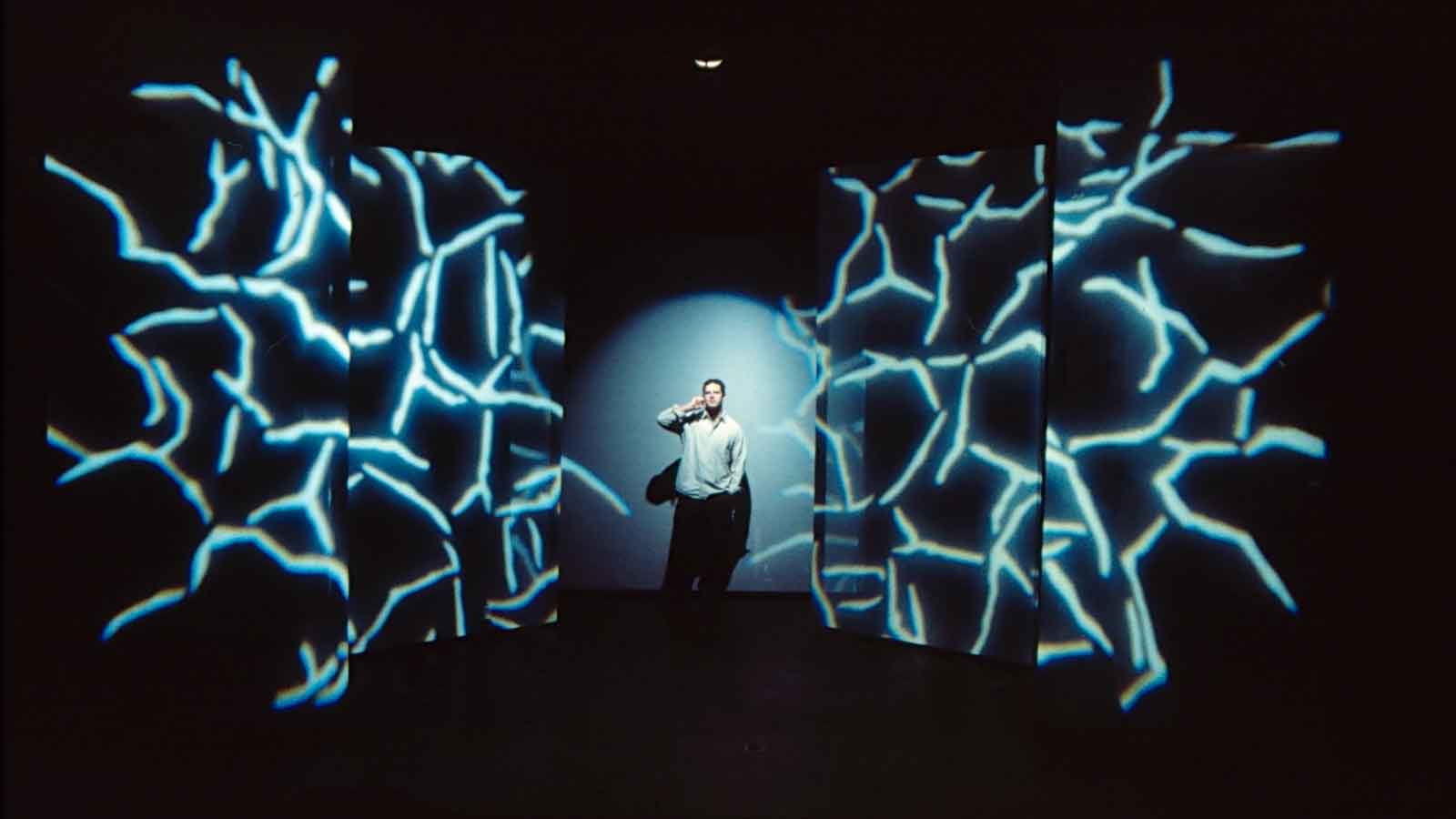 Mr. and Mrs. B is a pair of interdependent plays about the end of a marriage and what comes after. Five years into their marriage, Sara B. and Max B. decide to separate. One play is primarily concerned with Sara, one with Max, and in this production ran on alternate nights at the Powerhouse Theater in Santa Monica, California (RIP).

To support the wide variety of locales and moods, the scenery was conceived as a set of moveable blank scrim panels. Scenic design and renderings by Joe Pew.

Mrs. B Top of Show

Both plays open with Max and Sara in their separate empty apartments.  To support the wide variety of locales and moods, the scenery was conceived as a set of moveable blank scrim panels.

Mrs. B Top of Show Rendering

Above, a concept rendering of Sara’s apartment at the top of Mrs. B.   I do a lot of quick conceptual stuff with pastels on black construction paper.  They’re great for lighting because they mix additively and mimic the process of developing an image out of darkness.

Mr. B Top of Show

Max’s empty apartment at the top of Mr. B. His apartment is similar to the initial image in Mrs. B, but there are no windows and the scenic flats to the stage are more sharply tilted inward, forcing the perspective to give a more claustrophobic effect.

A color palette from Mrs. B. I used these to plan out what palette I need to be able to mix to.

Sara B’s apartment midway through the play. The cool white wall wash at the beginning of the play has been replaced with a warm-toned downlight. She meets a homeless artist and begins a relationship of sorts with him. Here she waits in vain for him to show up for dinner.

Transparency in Mr. B

Transparency was used extensively in Mr. B. to express the isolation and fluidity of his life. Here, he and the woman he has started dating leave each other a series of voicemails.

Above, the concept rendering for the previous image.  The gobo patterns used in the scene were cut from pie tins with an X-acto knife. The edges with this method are not as clean as those in a laser-cut commercial gobo, resulting in a smoke-like, indistinct effect.

Video and projected still images were used to allow a seamless, dreamy effect during the transitions.  Videography by Duncan White.

Sara dreams, and as she does her artist friend sketches her. Patterns appear on the scenic flats, foreshadowing the abstract paintings he will later hang on her walls.

Concept rendering for the above image.

Concept rendering for the above image.

Meanwhile, Max’s journey becomes more isolated and confused, and the second act of Mr. B. deals with his search for clarity.

Mr. and Mrs. B were produced by Footprint on the Sun Theater company, at the Powerhouse Theater.